So today Rory’s finger landed on Nova Scotia in Canada.

My husbands face was a picture to say the least, but we were not to be put off by him. We decided we would find something delicious for dinner today.

I messaged my friend in Canada with the ideas we had quickly come up with, but soon realised that we should be searching for ideas from Nova Scotia and not Canada in general as there was a possibility that the finger could land somewhere in Canada again.

Having googled “Foods from Nova Scotia” we were quickly guided to a fabulous site and the choices were amazing.

Our daughter in law to be is a Pescatarian and although we do cook alternatives, I thought today would be nice for us all to eat the same. Nova Scotia like Whitstable seems to pride itself in its seafood – so what better to have today than a seafood dish. 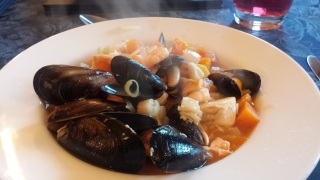 We added Mussels, Scallops, King prawns, Cod Haddock and Salmon, the recipe suggested we had it with garlic bread, which was a fab accompaniment to soak up the juices.

My Canadian friend said to me when I said I was going to make a Wild Blueberry Pie was “Oh blueberry pie is the bomb” and how right she was….absolutely amazeballs – again the recipe sourced from 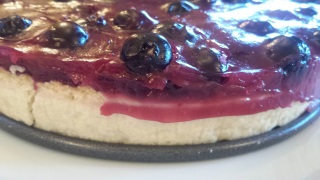 The recipe was easy to follow and the end result was absolutely delicious.  Ramona was right “The pie is a bomb”

So from Nova Scotia in Canada not bad day for Day 1…. Tomorrow we are heading to Nevada, USA….
Watch this space!

Sharing food with another human being is an intimate act that should not be indulged in lightly.