So we head down from Alaska – South to a warmer climate. Ian is very excited about tonights stop as curry – most forms – loves 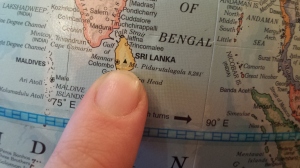 Sri Lanka until 1972 was known as Ceylon. Now officially the Democratic Socialist Republic of Sri Lanka, is an island situated to near South East India. It’s nautical borders are the beautiful island of the Maldives to the South West and India to the North West. There is recorded history spanning 3,000 years and there is allegedly evidence of pre historic human settlements that date back around 125,000 years. From as far back as the ancient silk road round to WWII Sri Lanka’s location and its deep harbours made it of tactical importance.

Sri Lanka is home to many languages, religions and ethnic groups, which makes it the varied and diverse country. The ethnic group native to the island, and in a majority are Sinhalese. However, it is home to many other groups such as the Indian and Sri Lankan Tamils, Kaffirs, Moors, Malays, Burghers and the aboriginal groups Vedda. There is an intense Buddhist tradition and as early as 29 BC, Buddhist writings of Sri Lanka can be found.  Ending in 2009 was the 30 year civil war that had blemished the county; the Sri Lankan military defeated the Liberation Tigers of Tamil Eelam.

The capital and largest city is Colombo and the country is a significant producer of rubber, gemstones, coconuts, coffee, tea and the native cinnamon. The island has varied landscapes with a variety of different types of life found on Earth and the variations within species – Biodiversity.

The cuisine of Sri Lanka can be either very mild or hot and can also be a combination and curries come in many varieties of flavours, colours and varieties. There are sways from colonial powers, Southern India and foreign traders with some of the main ingredients being coconut, rice and spices this being due to the history of the island being a producer of spice and trading the spices over several centuries. The food is very much a question of personal preference, but unique to their culture and plays an important part for the islanders. They make sweets with coconut milk and make milk rice. many Sri Lankans eat vegetables, but rice and curry is the main food with their firey hot flavours. Coconut milk is a very distinct feature and different regions specialise in different types of dishes.

Though famous for producing another pantry staple, black tea, Sri Lanka is also a key producer of high quality pepper. It is an essential ingredient in Sri Lankan cuisine, used in the spice blends of curries, such as this one, added to pickles and relishes, and even cracked over fresh tropical fruit with salt, sugar and chilli.

which we have decided to serve with a Potato Curry (Ala Hodi)  – which is boiled potato cooked in coconut milk. Its a basic recipe but a favourite among the locals. We decided to have this instead of boiled rice as it can be an accompaniment to any curry as well as being a great dish on its own 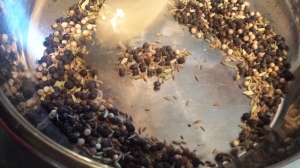 The smell was gorgeous as we began to toast the coriander seeds, fennel seeds, cumin and peppercorns. 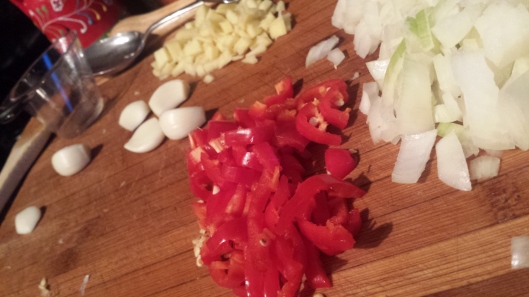 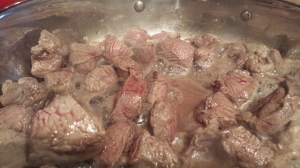 Meat browned and removed from the pan…

The onions, garlic,ginger and curry leaves, chilli, lemongrass and pandanus leaves put in the pan then when cooked for a little the toasted spices were added and the aromas were amazing….

Meat returned to the pan and coconut milk added – Oh boy! Smells divine…Placed in the oven for up to 2 hours. The recipe doesn’t mention what temperature, so suggests to me the chef cooked it on the hob, but I personally feel it would slow cook better in the oven and can be practically ignored, whilst the Ala Hodi is prepared…Simple dish which takes very little time at all to prepare or cook.

Fenugreek (well we didn’t have fenugreek….shame on us, so we added cumin seeds instead – cupboard will be replenished) and onions fried in oil, then the chillies and curry leaves.

Add the potato and continue to fry… The recipe then asks to add further chilli powder, which incidentally isn’t in the list of ingredients, but we omitted this as it had already been given a zap of flavour with the fresh chilli…

Then left to cook and infuse the flavours of the spices and the coconut milk.Again the smell of this dish was amazeballs and could definitely be eaten on its own with some chapatti to soak up the juices…

The finished dishes as served and the different spices could be smelt throughout the house…The living room had a fantastic aroma,which i noticed when venturing out of the kitchen..The beef was,  definitely in my opinion, better slow cooked in the oven.. 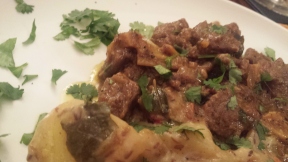 Family Verdict: Daughter in law to be, fantastic, lets have it again tomorrow!…

Hubby –  the shin of beef was a great cut of meat for this dish  – and probably other curry dishes too  – great price, very tender when cooked and very tasty.

The Chilli we added was just enough and made the dinner just hot enough for me.. Easy to prepare and prepping is the key to make this dish uncomplicated. Very,very tasty….

Join us next time in Europe… I know where. 🙂