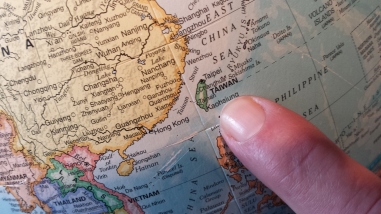 We have been travelling the world now, sharing our journey and hopefully sharing some interesting recipes. Thank you to all those who are following us and those who hve liked and commented on what you have seen. We love feed back so keep it coming and let us know if we can improve….

Traveling 5,502 miles West from Egypt we arrive at our next destination. Somewhere I haven’t visited – but then I really haven’t visited many places compared to most – but am told is an interesting place to go.. So maybe one day!

Officially The Republic of China (ROC), Taiwan – historically called Formosa, from Portuguese, situated in East Asia is a sovereign state. The island is now controlled by China and is situated approximately 180 km off its Southern coast. Taiwan has a landmass of around 36,000km2 and covers the Tropic of Cancer. To its North is The East China Sea, The Philippine Sea to the East. To the South is the Luzon Strait and the South China Sea is on its Southwest. Taiwan is also bordered by landmasses,  and to the West is PRC – (Peoples Republic of China), Japan is to the Northeast and East and the Philippines (already been a destination in our travels) is to the South. A population density of 648 people per km2, Taiwan is one the most densely populated countries in the world. The central government is based in Taipei and with the cities surrounding it the largest urban areas on the island.

Taiwan has been mainly inhabited by Taiwanese aborigines until around the 17th century and the “Age of Discovery” with the Dutch and Spanish settling. The Dutch were ejected and the pro-Ming loyalist Koxinga established the first Han Chinese state. In 1895 Taiwan was surrendered to Japan and then in 1945 Japan surrendered it back to the ROC…. More history can be found here. However, today Taiwan is high up in the ranking in terms of health care, education, economic freedom, human development and freedom of the press…

Taiwanese cooking itself is often linked with sways from mid to southern provinces of Mainland China, but most most markedly from the province of Fujian (Hokkien), but influences from all of Mainland China can easily be found. A Japanese sway can also be found from when Taiwan was ruled by Japan. Of course traditional Chinese food can be found..

Beef is less common than other meats in Taiwan, but pork,chicken, seafood, rice and soy are very very common ingredients. Historical reasons, religion and the elderly generation are the reason beef is less popular:

However, due to influences from the influx of out of province Chinese in the early 1900s, the Taiwanese version of beef noodle soup is now one of the most popular dishes in Taiwan.

Geographical location is a big influencer to and living and working on a crowded island, other sources of protein needed to be sourced, hence why seafood can be a main ingredient in their cooking..

Being Monday – we needed to find something quick, easy and tasty with the country that had been chosen.  We have many books and a few that take in far Eastern cooking but no recipes from Taiwan, so back the www we go to try and find something delicious….So having trawled the net came across a site, Rasa Malaysia:Easy Delicious Recipes! The author is Bee and was founded in 2006, Rasa Malaysia is a recipes website with over 800 easy recipes from Chinese, Malaysian, Japanese, to Thai, Vietnamese, Indian recipes, and more.

We chose a recipe called Three Cup Chicken. This is one of the most classic recipes from Taiwan and one that Bee (author of the site) would never miss out on when she eats in Taiwanese restaurants.

I love Taiwanese food—unpretentious, humble, and homey dishes that score high on yum-o-meter. 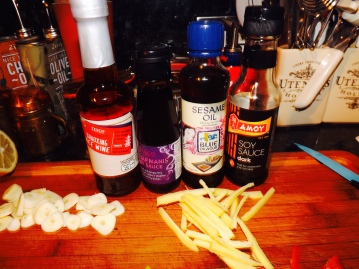 The name “Three cup chicken” is because of the three main ingredients being equal in ratio instead of an exact measurement: Sesame Oil, Chinese rice wine and soy sauce.    The recipe asks for drumsticks, but we aren’t partial to them as the meat quantity is not often enough. So we opted for chicken breasts and (I) am very sure the breast will work as well.

Initially the chicken is cut into pieces and then covered/rubbed with baking powder, set aside for a short time, around 10 minutes.

Then rinse off the chicken ensuring all the baking powder is removed. Pat dry and once more set aside.

Using one of our heavy based pans, or a wok, the sesame oil is added, followed by the garlic, ginger and stir fry gently until aromatic – ensuring you don’t burn. 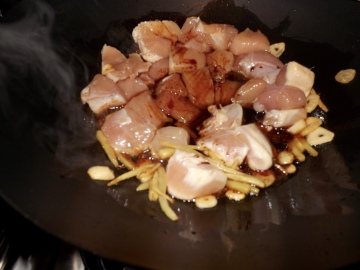 At this point the chicken is added back to the pan with the other ingredients and cooked until cooked through and tender. Possible around 10-15 minutes.

The recipe asks to add thai basil and stir. However, we couldn’t get hold of Thai basil and Italian basil is a very different flavour so we omitted it altogether.

We opted to serve this dish with noodle. Partly because we like a change from rice. You would have though a noodle dish would have been easy to find???  Well…..no,  they all seem to include meat or seafood and are a meal in themselves. We eventually found a recipe (picture only) that we decided to leave out the shrimp and squid (Baik kut kyee kaik – also known as Myeik Katkyikaik). There is no recipe as such, but common sense would allow you to put this recipe together and that is basically what we were going to do.  Not a dish from Taiwan, but nevertheless we believed flat rice noodles stir-fried in soy sauce, with bean sprouts, peas, pepper, and an onion would complement our dish. 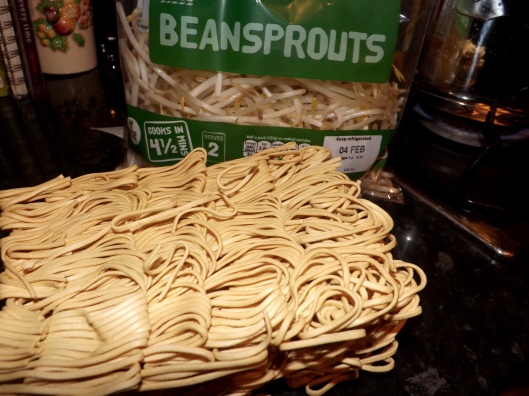 So there we were through the cooking, noodles being prepared and Ian decided that we should have plain noodles 🙂   and did, so the extra vegetables were added to the dish……Verdict to follow.

Family Verdict: Very simple to cook and prepare, even though we didn’t do the noodles planned. Very very tasty and we are glad we sourced the items necessary to this dish being authentic. I agree with the author of the recipe and it is “unpretentious, humble, and homey dish”.  The added veg to the dish enhanced it and didn’t spoil it at all…A lovely midweek – or even a Monday night supper…

See you in the next destination and if you try this dish, hope you enjoyed it as much as we did.

My favorite thing about Taiwan is the food.