7,489 miles West to the Pacific Ocean we travel from Nepal to Samoa. Somewhere again that we really want to visit, but alas we haven’t and so far no plans to do so. However, it can be added to the bucket list….

Saturday also saw us having an evening with our best friends and they had been warned we would spin the globe.      I honestly didn’t think it would have been as difficult as it was to find suitable dinner party food from Samoa, but it did prove a little hard. Our friend didn’t eat bananas and they eat a lot of bananas with all different courses it transpires, but I believe we have found something tasty…

Formally Western Samoa, Samoa is a Sovereign State in Polynesia in the South Pacific Ocean. Independence from New Zealand was in 1962. The two main islands are Upolu and Savai’i, which is the biggest Island in Polynesia. The capital is Apia and is on the Island of Upolu. In 1976 Samoa was accepted into the United Nations (UN). Before the 20th century the entire Island Group was called “Navigator Islands” a name given to them by European explorers because of the Samoans’ seafaring skills.  Samoa is a very interesting country to research and more history info can be found here.

The traditional culture of Samoa is based on Fa’a Samoa, and is a communal way of life. In Samoan culture, lots and most activities are done together and Faith, Family and Music are the three main parts of Samoan culture. The Samoan people have lived off the land for hundreds of years, chiefly as hunters, gatherers, farmers, and fishers. This lifestyle remains somewhat true even today as the people are at least moderately reliant on the land and seas. However, more important to the people in the past and today are community and family as many people live in rural areas where most people know each other.

Samoa is a group of islands in the South Pacific, home to some of the smiliest people in the world. Samoan people love to joke around, sing, dance and are serious about three things in life: God, family and food.

Sundays are conventionally a day of rest, and like here in “my world” in the UK, many families congregate to share an umu together for a Sunday afternoon meal.  A little like us all meeting for a traditional Sunday Roast. It is customary the older members of the family will sit and eat first, and as the meal continues the younger members and then children are invited to eat. The umu contains a profusion and mixture of dishes ranging from a whole pig, fresh seaweed and crayfish to baked taro and rice.  Coconut appears in many Samoan dishes, for example palusami, a parcel of coconut cream wrapped in taro leaves baked in the umu.

When these first settlers did arrive, they found plenty of animals in the surrounding seas that were, and still are, used for the people’s diet, including crabs, octopus, turtles, fish of all kinds such as tuna, and sea birds such as noddies and terns.

The formalities and most important aspects of dining in Samoa are related to behaviour more than actual eating. As an example, bringing food to a dinner, even a small side dish or dessert can cause great offense to the host by indicating they will not prepare enough food for everyone. Also let your host seat you as guests are also often asked to sit in the middle of the table so they may converse with everyone more easily.  Once everyone is seated it would be very noticeable there would be a lack of cutlery as most/many Samoans eat with their hands.  It is important that you follow suite….We used cutlery at our dinner party. Taking a second serving of food is considered rude, therefore it is important that you have planned what you wish to take before starting to eat and it is very important to try every dish that is offered. This is a sign of respect and appreciation to your host.  You mustn’t eat until signalled to do so, even though your host would expect you start first and it is so important to eat at the same pace as everyone else.  Most of the people will leave some food behind then will take their excess food home for a latter meal. You are welcome to do the same, but as a guest your host may insist you finish all of your food.

Table laid my attention turned to the kitchen and  I wanted to make the evening as authentic as possible.

For our first course we opted for aromatic mussels. Fish is very popular around the Pacific Islands, but to be honest the fish dishes that I was finding didn’t really jump out at me. Googling mussels and Samoa found many recipes for aromatic mussels but already having a recipe from good old  “Jamie” Wok – cooked fragrant mussels opted to use that one. Recipe can be found in “Jamie Oliver – The return of the naked chef” Pg 154  Very easy to prepare and cooked relatively quickly. The aromas from all the added  herbs and spices were gorgeous…

The main course consisted of Pork and is Pork is used today as part of the Umu… As there was only four of us, a whole pig wasn’t necessary and I also needed to find something that we could cook in doors as February isn’t really the month or the weather for lighting a BBQ…Pork isn’t my favourite meat but was pleasantly surprised how tender it was after carving.  Samoan Pork Roast with Katsu Sauce

Basically the pork was prepared by scoring and adding slices of garlic.     The recipe asked for liquid smoke, that were lead to believe we could by in  our local supermarket, but alas to no avail, they had never heard of it, so we substituted the liquid smoke with chipotle sauce which is smokey and BBQ’y… The sauce was rubbed over the top of the pork, covering the garlic and then roasted in the oven for around 3 hours.

The Katsu sauce is a combination of  ketchup, light soy sauce, pear or pineapple juice (or brown sugar), Worcestershire sauce and cayenne pepper to taste. Heated in a pan until thicker and then set aside. The sauce will be warmed up when ready to serve and drizzled over the pork.

Rice is a staple food in samoa and coconut is eaten with quite a lot of dishes, so fittingly I found a recipe for Coconut Rice – Alaisa fa’apopo  Again very easy to cook and it made a fantastic accompaniment. However, in Samoan cuisine, this is not a side-dish, more like a savoury snack.  Us Brits do like a little veg with our meals and I did feel I should have some vegetables for our guests. Being a lover of sweet potato or yams, which again are a staple of Samoa opted for some sweet potato wedges and a dish called Samoan Palusami as mentioned earlier in the blog.

“Palusami is a main dish from Samoa made with coconut milk. In the islands of Samoa, we use taro leaves and the Samoan corn-beef”

A substitute for Taro leaves is spinach and to be honest what is the difference between Samoan corned beef and the one we can buy here in our butchers? 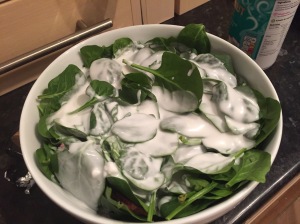 The Palusami is basically the two ingredients layered and then covered in coconut milk and baked in the oven for around 45 mins. I am not sure I would eat it as a main course, but it made a fantastic accompaniment. The finished baked dish didn’t look altogether appealing but the taste was lovely and actually again complimented the meal. 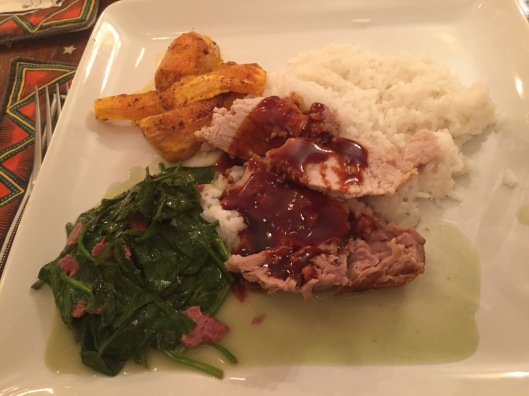 Dessert was not an easy thing to try and source either in my opinion, but I managed and found a delicious dessert called a coconut cream pie. It was very similar to make a lemon meringue pie. the only criticism was that the author of the recipe wasn’t clear about the size/depth of tin to be used, therefore my pie tin was too shallow and the pie poured over the side of the pastry and the plate it was baked on. The end result was the same and it tasted amazing, but next time and there will be a next time, I will use a much deeper tin.

The pastry was a butter based pastry, which contained butter, sugar, egg, flour,baking powder, cornflour and custard powder. Never have I put custard powder in pastry before, but it was easy to handle and definitely would have been better in a larger tin. The pastry is cooked for around 20 minutes until golden. 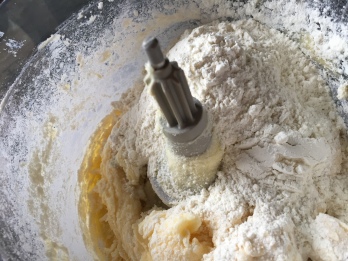 The coconut cream layer consisted of milk, sugar, salt, cornflour, grated coconut, vanilla essence and butter – not a very health conscious dessert, I dread to think about the calories, but its a dinner party….everything is calorie free…. 😉

The lemon cream layer even more indulgent than the previous layer  which had ingredients of double cream, condensed milk, egg yolks and lemon juice and zest – again easy to prepare.

The last layer is a meringue layer, made with the reserved egg whites and sugar. 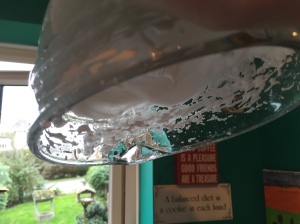 A good test to see that my meringue is ready….

The dessert is constructed as the recipe instructs and baked in the oven for around 20 minutes until the meringue is golden. 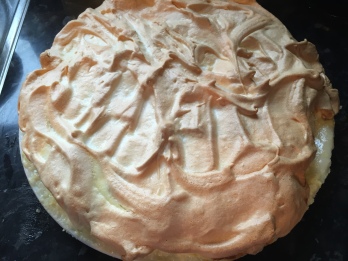 Family Verdict: My husband said the overall meal wasn’t one of the better ones he had had, although the pork and sauce were beautifully cooked and tender. I liked the spinach dish, but it wasn’t appealing to look at and am not sure I would want it again but it did compliment the meat. Rice is rice and sweet potato is sweet potato but a lovely accompaniment.  The dessert, although not as I imagined, was delicious and a definitely make again dessert. Our guests enjoyed themselves and said they did enjoy the meal, but agreed with the spinach dish….